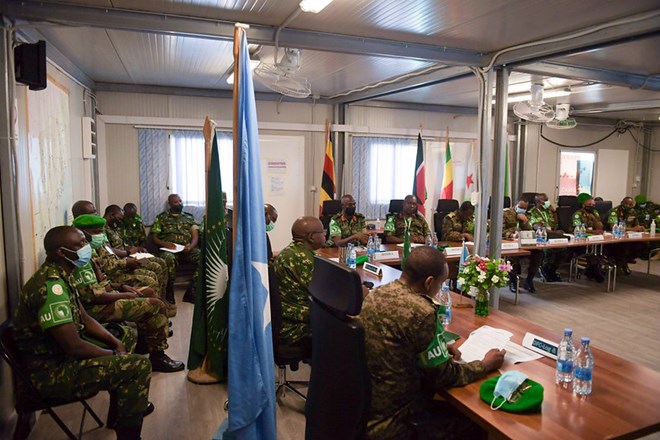 Following a two-day meeting in Mogadishu, AMISOM military commanders have announced that they intend to speed up the implementation of joint operations with the Somali National Army as it prepares for its scheduled to exit in December 2021.

In a statement released on Friday, AMSIOM said that it had evaluated the progress made on Somalia’s Transitional Plan – the federal government’s roadmap to take over the security responsibility post-AMISOM –  and AMISOM’s Concept of Operations.advertisementsAMISOM Force Commander, Lt. Gen. Diomede Ndegeya, said that the developments would be further discussed with the Somali security sector at an upcoming conference.

“The output of this meeting will inform and feed into the upcoming conference which we will have with the Somalia security forces and Somalia’s international partners. Whatever the nature of the post-2021 mission, it is imperative for all our troops in the sectors to strengthen their offensive capability.”

Ndegeya added that a revised Concept of Operation, which will support the implementation of the security plan, will be needed.

“I appreciate the enduring work AMISOM forces have done in the sectors to ensure security and stability in Somalia. However, there is the need to generate a revised joint AMISOM/SNA realistic, workable, and fixed concept of operations, which will respond appropriately to threat assessments and an assessment of the friendly forces,” he said.

The Deputy Force Commander of AMISOM in charge of Operations and Plans, Maj. Gen. William Kitsao Shume, told the commanders that one of AMISOM’s core objectives was to support Somalia in the battle against Al-Shabaab, and to that end, the mission has succeeded.

“Our mandate is to degrade Al-Shabaab, which we continue to do since we came into Somalia. We have secured population centres which give the local population the freedom to go about their day-to-day activities,” said Maj. Gen. Shume.

In mid-March, the UN Security Council reauthorized the African Union Mission in Somalia to be extended until December 31, 2021.

Five die due to drought in central Somalia